Gift Ideas by age and interest

Construction toys are great for boys and girls. Playing with construction toys can help develop spatial skills, fine motor skills, imagination and creativity.  Besides that, they offer endless fun.

How about these then? UGears Treasure Box
UGears Treasure Box. Ugears. This exquisite mechanical Ugears Treasure Box will bring a little magic to your dresser or mantelpiece! Perfect for jewellery, notes and other important trinkets, this Ugears project will keep your secrets safe inside. But, youll have to solve the secrets of the puzzle first to open the box! from Coolthings.com.au 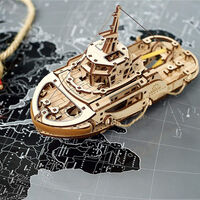 UGears Tugboat
UGears Tugboat. UGears. This incredible Ugears Tugboat mimics a real working tugboat rocking in the waves! Listen as it moves along any flat surface to the sound of a real diesel-powered engine, created by a working pendulum! Youll be able to view the other inner workings too, as the body is designed to expose the beautiful gears and rubber-band motor in motion. from Coolthings.com.au UGears Bike VM-02
UGears Bike VM-02. UGears. Get your leather jacket on and set off on a road trip adventure with the Ugears Bike VM-02! Its time to absorb the exhilaration of total velocity with this sleek and powerful motor bike from Ugears. Like all Ugears models, your bike produces real motion by means of a rubber band wind-up motor! from Coolthings.com.au UGears Timer
UGears Timer. UGEARS. The UGears Timer. A unique looking Wooden Timer with a working wind up alarm mechanism that will be set off when time runs out. After construction you simply set the Timer's rubber band-powered counter hand, wind up the alarm, and then watch the relaxing and elegant clockwork tick away until the alarm tells you its time to do it all again. from Coolthings.com.au