Disk Dash
Disk Dash. Schylling. Disk Dash is a fast-paced, fiercely fun game that will get your heart pumping as you race to beat your opponent! The aim of the game is to dash your disks as fast as you can at the same time as your opponent to reach the other side of the board. Aim your disks towards the small gateway in the middle of the board using the elastic launcher! What a frantic test of your skills! from Coolthings.com.au 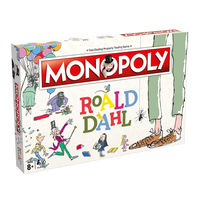 Cluedo Harry Potter Edition
Cluedo Harry Potter Edition. SimplyCool. Some dark magic has been performed at Hogwarts and a student has vanished from the famous school of Witchcraft and Wizardry! Can you solve their mysterious disappearance? Play as Harry, Ron, Hermione, Ginny, Luna or Neville as you discover the secrets of Hogwarts and try to discover how the student disappeared, who did it and where it occurred! Navigate your way around the game board corridors as you assemble the facts. But watch out! Wheels on the game board actually move to change your path. Was it Draco Malfoy who committed the crime? If you think you've figured it out, head to The Burrow to make your final accusation and win the game! from Coolthings.com.au Slips & Ladders the Board Game from Gifts Australia
Looking for beautifully crafted gifts for kids that are eco-friendly? We’ve got just the thing; the beautifully designed Slips and Ladders game from eeBoo. There’s no plastic in sight; instead this game is made from 75% recycled materials, printed with soy inks; great for kids and great for the planet too. Oh the suspense! Who will get lucky and climb the ladders, and who will be sent sliding down slippery slides? Just like the original snakes and ladders game this one will delight kids of all ages for hours, with suitability for 2 to 4 players. This is a winning Christmas gift for kids and we know they’ll love it. Recommended for ages 5+ the first player to the finish square wins, but we know they’re winners already because they’ll be receiving this great game from you! The game box measures 24cm x 24cm and the board game board opens to 45.5cm x 45.5cm, the pieces are stored in the handy cotton bag that’s included. Remember those childhood days when you play the snakes and ladders game with your friends? Well, this game is similar, also known as the Slips and ladders board game. Prepare to have a whale of a time when you bring this board game home as Christmas gifts for your family and friends! Take a look at our beautifully crafted Slips & Ladders board game from the award-winning and famous toy manufacturer, Eeboo. Eeboo’s Slips & Ladders board game is one game that kids will definitely love. Great as Christmas gifts for kids, the game just reminds you of the classic snakes and ladders game….